Select a letter to find an ailment & hopefully a remedy. 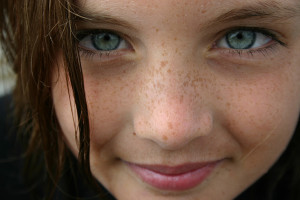 Freckles are flat, tanned circular spots that typically are the size of the head of a common nail. The spots are multiple and may develop on sun-exposed skin after repeated exposure to sunlight. These are particularly common in people of fair complexion on upper-body skin areas like the cheeks, nose, arms, and upper shoulders. They may appear on people as young as 1 or 2 years of age.

Most freckles are uniform in color. On different people, freckles may vary somewhat in color — theymay be reddish, yellow, tan, light brown, brown, orblack — but they are basically slightly darker than the surrounding skin. They may become darker and more apparent after sun exposure and lighten in the winter months. Freckles are due to an increase in the amount of dark pigment called melanin and are not due to an increase in the total number of pigment-producing cells called melanocytes